Farfalle with Bacon and Endives 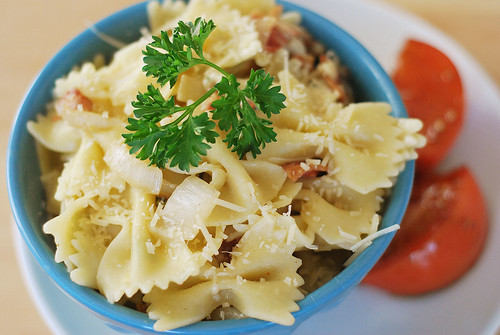 I have to be honest with y’all.

I haven’t been cooking or baking lately. Last night I cooked for the first time in a week. We have been going out every night because my husband won’t tell me what he wants to eat in his last little bit of time at home. So I thought about what I would want if the situation was reversed and I was going to be living off MREs for the next 9 months, and decided that I’d want to stuff myself with burritos the size of my head and drive-thru Chinese food before leaving. Home cooked meals? Psssh! I’d totally miss restaurants.

But the day before Valentine’s Day, this showed up on my doorstep: 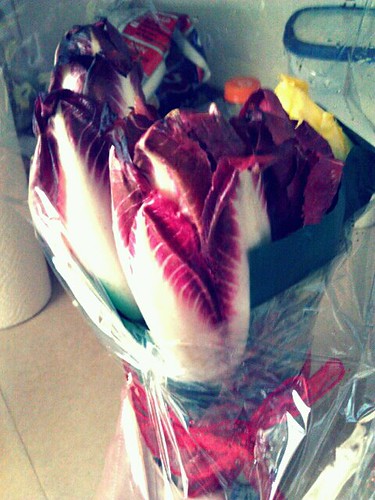 It’s a bouquet of endives! How stinkin’ cute is it?!

Before those showed up, I’d never given endives much thought and I don’t think I’d ever tried one. But I couldn’t just let them go to waste.

So that’s how I ended up cooking after a week of not turning my stove on. (Except to boil coffee. Which my husband says doesn’t count as cooking, no matter how much I insist it does.)

The great thing about this pasta is that it’s really creamy without using any cream! You take a quart of chicken broth and boil it down – it gets really thick and makes your house smell amazing. Then at the end you stir in just a little Parmesan. Seriously good. If you have endives you don’t know what to do with, I definitely recommend this.

This was one of those recipes that could’ve gone either way with my husband but he LOVED it. As we speak, the leftovers are packed in his work bag so he can eat it for breakfast today.

12 Responses to "Farfalle with Bacon and Endives"