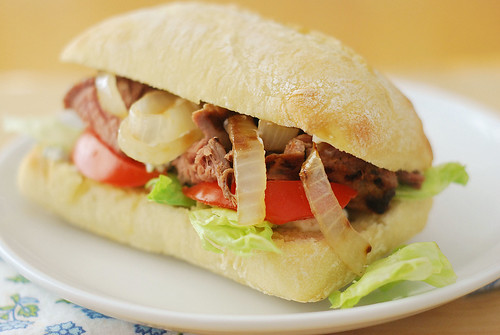 My husband finally deployed a few weeks back. I say “finally” because I swear the dang thing was pushed back 15 times. There came a time where he would come home, announce that it was pushed back again, and I would burst into tears. I was so ready for him to leave, so that we could knock out the 9 (or 12) months and be done for now.

It’s been a weird couple weeks since he left. We’ve had zero communication since he got to where he’s supposed to be. We weren’t sure if he would have internet and it’s looking like he doesn’t. But hey, I knew they didn’t have showers there so I don’t know why I set my hopes high on the internet front! They need to come up with a “I’m alive” button that soldiers can just press and have a message transmitted directly back to their families. Until then, I’ll be spending most of my days staring at the Facebook homepage, willing that little green dot to pop up by his name. (That doesn’t work, btw.)

I made him these sandwiches before he left. The man loves steak and he loves sandwiches so I knew I couldn’t really go wrong here, even if I did include his least favorite cheese. He LOVED these! I turned mine into a salad and it was delicious!

This was my first time using flank steak (it’s expensive around here!) and I was really impressed with it. It took no time at all and it was really easy to tell when it was done, which it something I struggle with when cooking meat. If you don’t want to fire up the grill, you can do this on the stove but the onions won’t have those lovely grill marks. :)

(Thanks for allowing me a whiny post today – I promise I won’t whine often. Once a month sound good? Okay.) 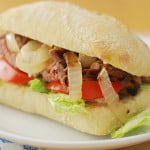