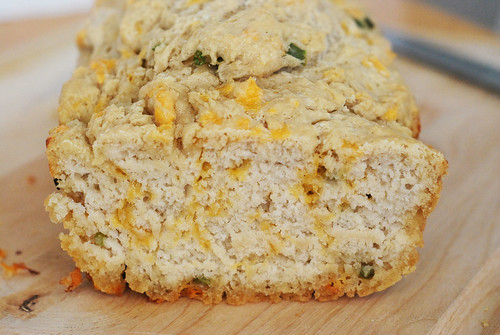 After a short Project Pastry Queen break, I am back with beer bread!

I almost sat this week out too. Let me explain – I was down to 1 stick of butter. ONE! Unheard of around here because I like to buy those massive 4 pound packs at Costco. But anyway, I somehow got down to only 1 stick and grocery day was still 4 days away. And this beer bread recipe? It calls for a whole stick. Not just that, it calls for half the stick to be poured into the bottom of the baking pan and the other half to be poured on top of the batter.

That’s weird, right? I’ve made beer bread a few times in the past and I’ve never had to pour butter over the top of the batter.

But I was making soup so we needed bread.

It was ridiculous. The butter on the bottom made it so crispy, and I added shredded cheddar which also got crispy on the bottom. I threw in some green onions which made it even more fantastic. We – and by we, I mean me – Â finished off the loaf within a couple hours.

I do think the amount of butter is a little excessive. I originally had the loaf on a cloth napkin while taking photos and the napkin was covered in greasiness when I was done! I would guess than half the amount of butter would be sufficient but don’t hate me if it’s not.

Amanda will have the recipe waiting for you. You need to try it!