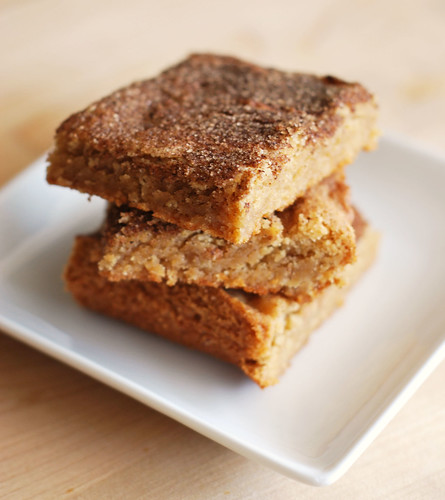 There are certain recipes that, as much as I love them, I only make them around the holidays. Like snickerdoodles. They just scream Christmas to me â€“ I think it’s all the cinnamon. But sometimes, bloggers influence me and I break all my rules. Jamie from My Baking Addiction made these blondies first and I filed the recipe away to use around Christmas. Then Michelle from Brown Eyed Baker had to go and ruin all my plans. She made them this week and after hearing her rave about them on Twitter, I knew I needed to make them immediately.

They’re regular blondies with some cinnamon and nutmeg mixed it and then topped with cinnamon sugar. The cinnamon sugar up top reminded me of cinnamon toast and the blondie part was soft and cake-like. I do have to say that it was weird having all the spicy smells in my kitchen in the middle of July but it was well worth it. I made half the recipe and the batch didn’t make it through the night.