I’m not a huge red velvet fan but I couldn’t resist this recipe. It’s pretty much a red velvet brownie with a cheesecake layer on top. Yeah, it’s good. My husband came home while they were baking, peeked in the oven, and said – and I quote – “Eww, what is that?” But guess what!

We got down to the last brownie and he asked if I wanted to split it. When I said no, he said “Good, I wanted it all to myself!”

They’re rich and delicious and you can definitely tell that they are red velvet and not just a regular brownie. The cheesecake layer is what makes them, though. It’s sweet but not overly sweet like a frosting. The two go perfectly together! 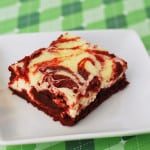