Caesar Pasta Salad – the perfect barbecue or potluck side dish! Pasta with bacon, tomatoes, olives, Parmesan cheese, and caeser dressing. It is really simple and comes together in less than 20 minutes! 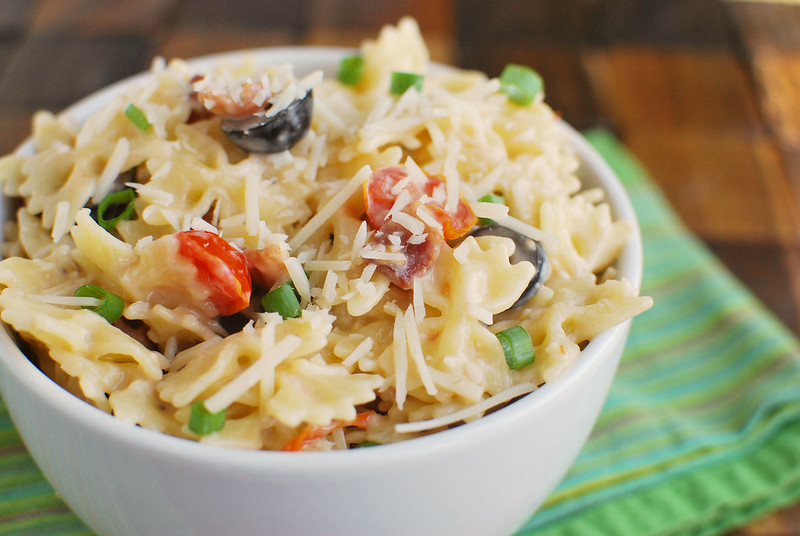 I made my husband cook pretty much every meal this past weekend. Even though it was his birthday weekend.

And I totally tricked him into it by tossing the new grilling issue of Bon Appetit at him on Friday afternoon. I was hoping he’d find at least a couple things that he needed to make immediately and he came through for me.

On Saturday he made some grilled chicken tacos and then on Sunday he made the always popular beer can chicken. 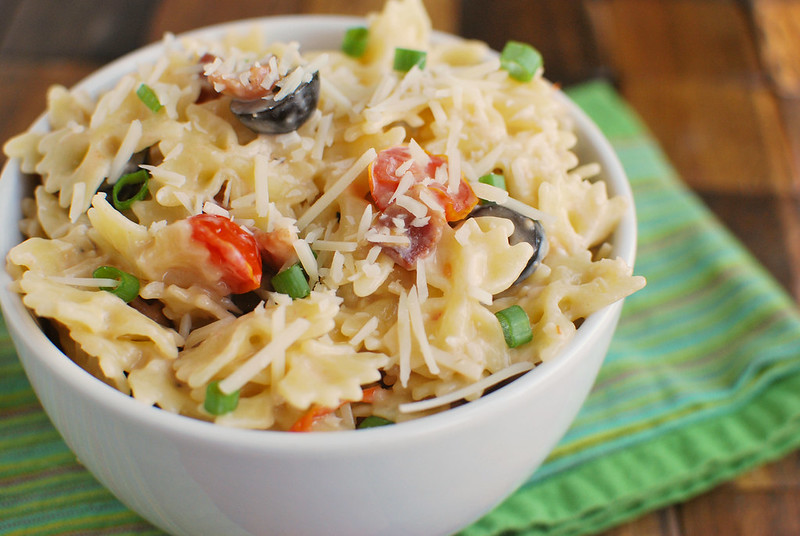 How to Make Caesar Pasta Salad!

I decided to actually get off my butt and make some Caesar Pasta Salad to go with the beer can chicken but don’t worry, I didn’t push myself too hard.

This is one of the simplest pasta salads ever! It is made with bottled Caesar dressing so other than cooking the pasta and bacon, you’re really just throwing halved grape tomatoes, sliced black olives, Parmesan cheese, garlic, and lemon juice into a bowl and stirring it all together.

The whole family loved this one! I was worried the Caesar would be a little too tangy for the tiny ones but they ate it up. And these kids usually don’t eat olives or tomatoes! I added chicken to mine to make it a one-bowl meal and it was delicious!

You can make it ahead of time – just store it in the fridge until you are ready to serve it. If you are going to make it more than an hour or so ahead of time, I would wait to add the bacon – nobody wants soggy bacon in their pasta salad!

Bacon Ranch Pasta Salad – ranch makes everything better! Pasta with bacon, avocado, tomatoes, and olives, all tossed in ranch dressing. This one is always a kid favorite and really simple.

Macaroni Salad – the classic deli salad! Pasta with ham, cheddar cheese, and peas in a mayo based dressing. It goes perfectly with any kind of barbecue.