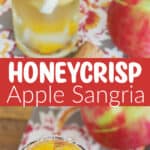 I think I am the last person in the universe to jump on the honeycrisp train. Just this week though, they were the cheapest apples at my grocery store so I bought them and they are amazing. Seriously, crisp like I didn’t even know apples could be!

I haven’t told you guys but Nicole and I had so much fun doing our s’mores week that we wanted to do something together every week. And we decided on drinks because… well duh. So for the next little while we’ll be doing a themed drink each week!

Apples were the theme of the week and I’ve had this sangria on my “must make” list since Brandy suggested I try it one night when I was whining on Twitter about how I hated wine. It specifically calls for honeycrisp apples and since I’d just bought 15 pounds (seriously) of honeycrisp, it was perfect!

How To Make Honeycrisp Apple Sangria

This is a really easy cocktail since it requires literally zero cooking – no simple syrup, nothing! – but it does need to sit for awhile. So make sure you give yourself enough time to let it sit for at least 4 hours but preferably overnight.

It starts by combining Chardonnay (you can use a cheap one – we’re adding enough to it that it you won’t be able to tell!), peach schnapps, and honey. Then stir in chopped honeycrisp apple, orange slices, lemon slices, lime slices, cinnamon sticks, fresh ginger, and whole cloves.

That’s the part that needs to sit overnight if possible.

After it sits, strain it to get rid of all the fruit and spicy bits and there’s your sangria! It’s served topped with club soda and with freshly chopped honeycrisp apple and orange segments.

Can You Use a Different Apple?

Yes, of course! If it’s not honeycrisp season or they are just stupid expensive, use a similar apple like jazz, pink lady, or ambrosia. It will be just as delicious!