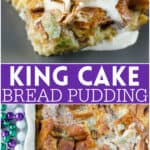 What Is a King Cake?

It’s a yeast dough filled with cinnamon (or sometimes cream cheese) and then it’s roll up and formed into a large oval. Once it’s baked, it’s frosted and covered in purple, yellow, and green sprinkles.

That’s where the green ooze came from.

Think of it like a giant cinnamon roll. But better, because sprinkles. And everything is better during Mardi Gras season.

Why Is There a Baby in King Cake?

Whoever finds the baby gets good luck but also has to buy next year’s king cake!

Just pop a baby on top of everyone’s bread pudding for a super cute way to serve it.