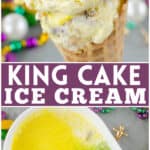 It’s my favorite time of year!

Mardi Gras will forever be my favorite holiday. Who doesn’t love a giant party where moonpies get thrown at you?! Plus king cake?! And beads?! There’s just no better holiday.

I love this King Cake Ice Cream almost as much as I love Mardi Gras. It’s a cream cheese ice cream with diced king cake pieces mixed in and layers of sprinkles.

What Is a King Cake?

If you aren’t familiar, a king cake is kind of like a big, round cinnamon roll. It’s a sweet yeast dough that’s filled with cinnamon sugar and nuts and rolled up like a cinnamon roll and then formed into a ring. It gets baked and then topped with icing and Mardi Gras color sprinkles.

Some people get fancy with the fillings and do cream cheese (my favorite!) or a praline filling.

Where Do You Get King Cake?

I live in Texas and can find king cakes during Mardi Gras season so check your grocery store bakery, local bakeries, things like that.

However, I started making king cakes mid-January before HEB had them and this is my favorite king cake recipe. I used a cinnamon sugar filling for this ice cream recipe though.

Yes, there are a lot of steps. But yes, it will be worth it.

Warm the milk, sugar, heavy whipping cream, salt, and vanilla bean paste in a heavy-bottomed pot over medium heat just until it starts to bubble.

While the milk mixture is heating, whisk together the egg yolks. Once the milk starts to bubble, slowly stream in about 1 cup of the milk while whisking constantly. Pour the egg yolk mixture into the pot you used to heat the milk.

Heat the mixture over medium heat, stirring constantly, until the mixture thickens and coats the back of a spoon.

Pour the custard through a fine mesh strainer and into a large bowl. While mixture is still hot, add cream cheese and stir until cream cheese is completely melted. Chill the mixture overnight.

Freeze according to manufacturer's instructions. Once frozen, fold in diced king cake.