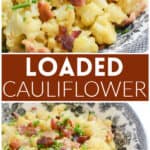 Loaded Cauliflower Mac and Cheese – cauliflower tossed in a delicious paleo cheese sauce and topped with bacon. Get your mac and cheese fix without the guilt!

I discovered that Crazy Ex-Girlfriend is now on Netflix and umm, it changed my life. You guys. No one told me that it’s a musical series.

Anyway, it’s really good and I’m not gonna tell you how many episodes I watched while I was catching up on some work that I’m waaaay behind on.

How To Make Loaded Cauliflower Mac and Cheese!

It’s not really mac and cheese, I know. But when you’re doing the paleo thing, this works. I grilled up some chicken thighs and threw them on top and called it dinner several nights in a row. But it’s also an excellent side dish!

Wait, Amanda, you can’t have cheese when you’re paleo.

The sauce calls for nutritional yeast which has a cheesy quality and is also really good for you.