Slow Cooker Caramel Apple Crumble – cinnamon apples topped with a crumbly oat mixture – and it’s made in the crockpot so it is super simple! A delicious fall dessert recipe. 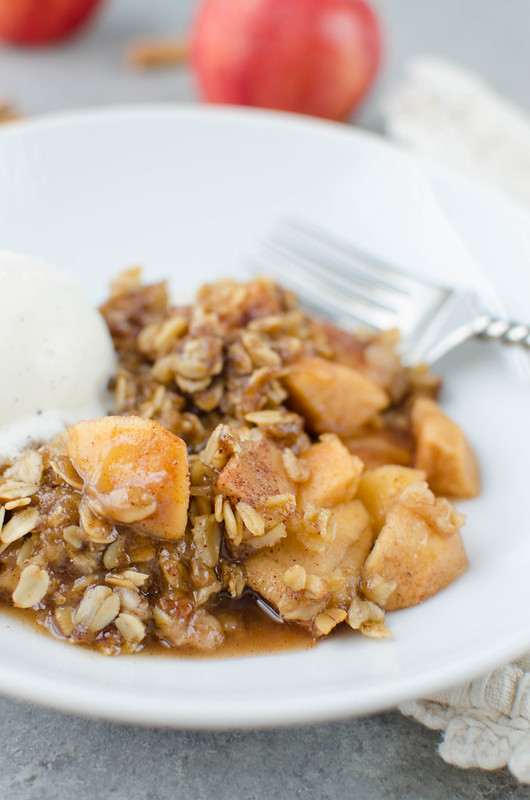 Many apologies for being absent lately. I’m sure I mentioned that my husband has been in and out of the field all month and every time he comes home, we all get sick. And by “we all” I mean the baby and I. Because that’s just the kind of luck we have.

I figured I could at least update you on the exciting things that have happened since my last post. Most of it is about the dogs. You’re welcome.

My life is so exciting. 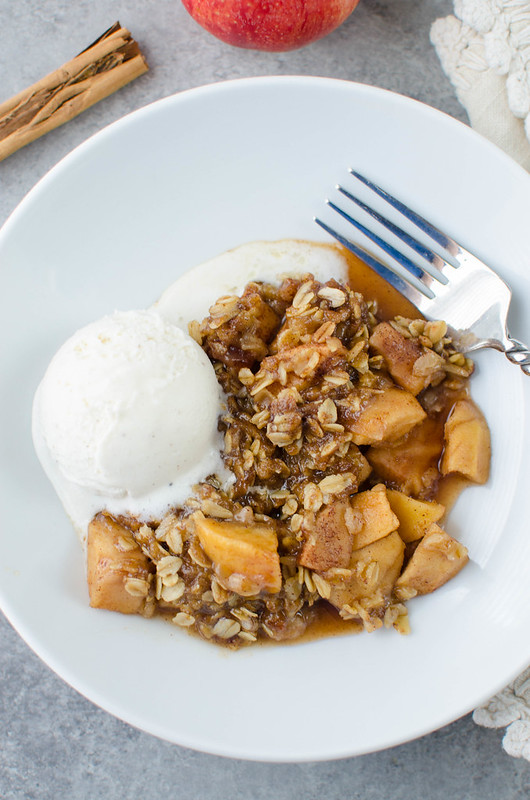 In unrelated news, I am in full-on fall mode. I am checking the mountains every day for snow even though I know we probably still have several months before we get any snow down here. I’m looking for Halloween costumes every time I go into a store.

I am ready for fall and pumpkins and apple picking and everything else that comes with fall!

I definitely plan on holding off on pumpkin until the Annual Food Bloggers Must Post Pumpkin Recipes Day (October 1) but I figured it’s never too early for apples! 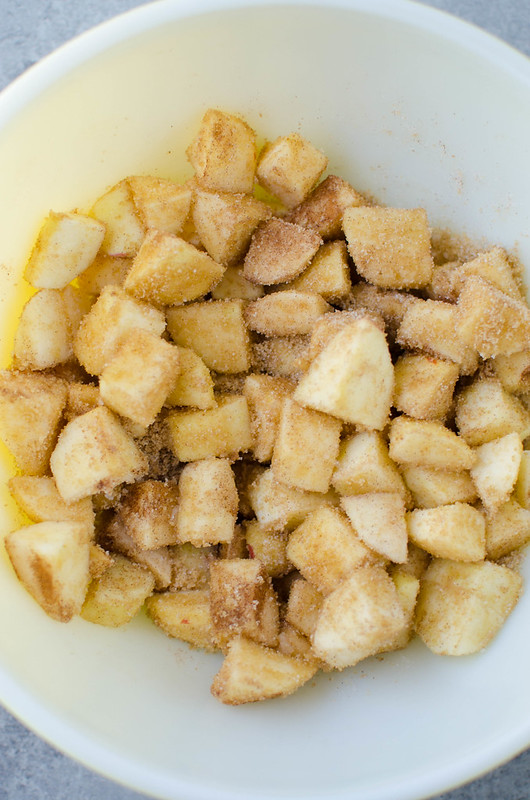 This Slow Cooker Caramel Apple Crumble is one of my favorite fall recipes!

I love a crockpot dessert and this one couldn’t be any simpler. I’m willing to bet that you already have ever single ingredient in your kitchen so now you just have to put it all together in your slow cooker and let it work it’s magic.

You just put apples, white and brown sugar, and cinnamon in the bottom of your slow cooker. Then the apples get topped with the crumble mixture which is made with oats, more brown sugar, a tiny bit of flour, vanilla, and butter. Cook it on low for 4 hours or high for 2 hours and that’s it! Top it with whipped cream or vanilla ice cream if you’re feeling extra naughty.

I love making this one for the parties we host during football season because it’s hands off and it’s always such a hit. Someone always asks for this recipe! 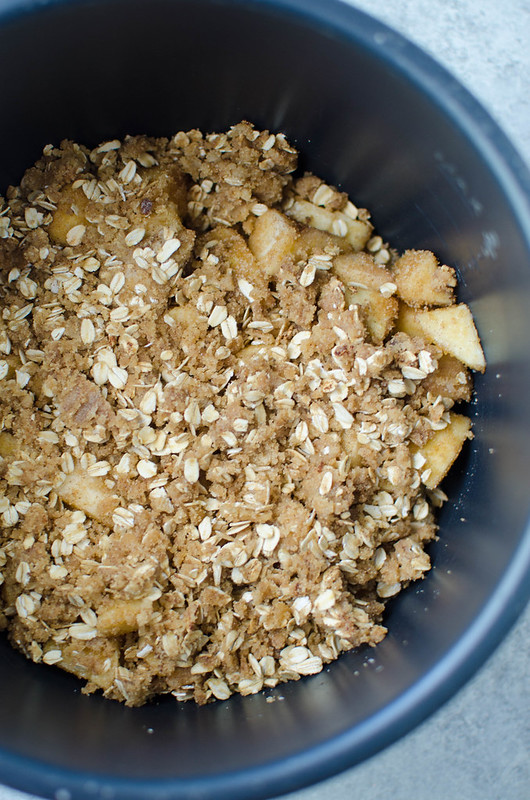 But Where Is the Caramel?

I get a lot of questions asking why caramel isn’t listed in the ingredients.

Because caramel is just caramelized sugar!

The sugars turn into the caramel when they are cooked. And since this recipe calls for both brown sugar and granulated sugar, they turn into a super thick, super delicious caramel that coats the apples perfectly. 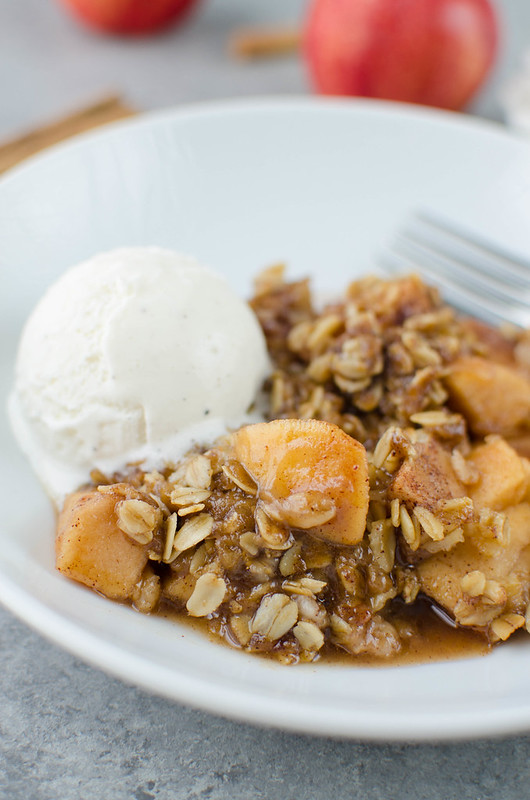 More Desserts in the Slow Cooker 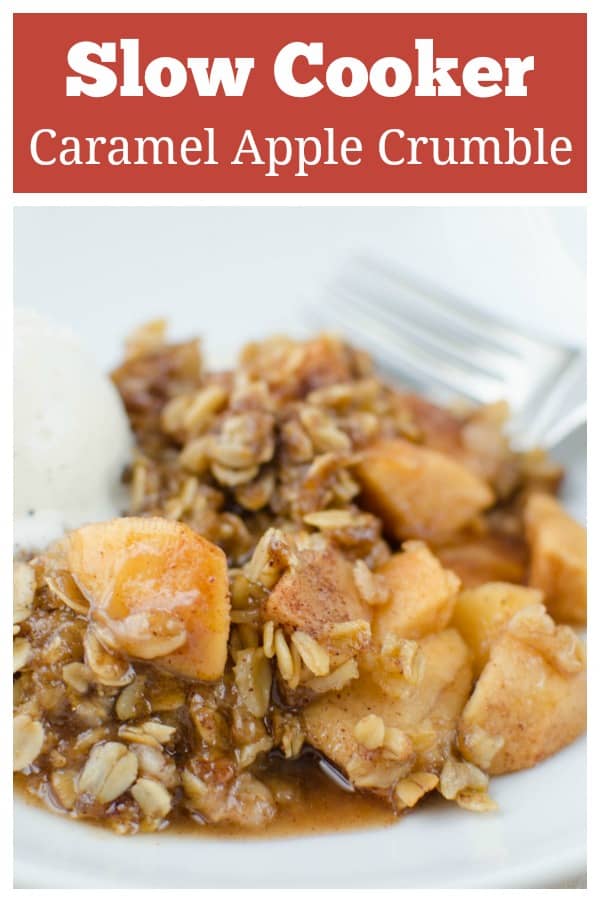