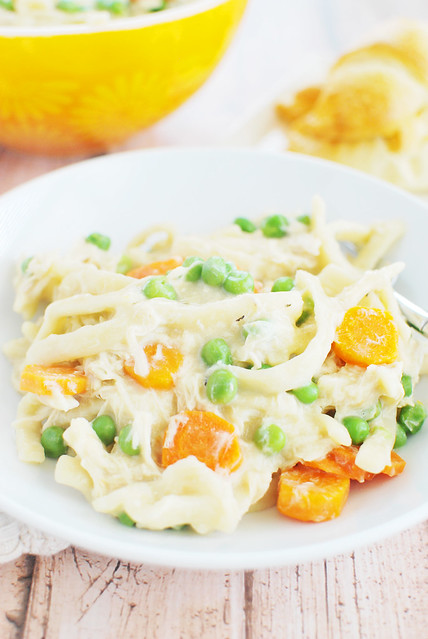 One thing that always stumps me is when someone tells me that their kids love soup.

My kids wouldn’t know what to do with soup. If they can’t stab it with a fork, it’s not happening.

I know, I should teach them how to properly eat.

I also tried to teach them not to jump on the furniture, share popsicles with the dogs, or announce when they… ummm… make gross noises in public.

My husband says “they’re boys!” And I say they’re his boys and therefore more stubborn and obnoxious than all the other boys in the world.

So we don’t eat soup. If I want soup, I go by Panera for some French onion.

But really, is there anything more comforting that chicken noodle soup? Nope. And that’s exactly what I’m craving in this weirdly cold weather we’ve been having.

This Chicken and Noodles is like chicken noodle soup but without the soup. So it’s got the chicken, the noodles, the carrots, celery, even some peas. You make it like you’d make soup but at the end you thicken it with a milk and flour mixture. It makes a creamy sauce that really coats everything.

You can click through to the original recipe if you need instructions on cooking the chicken but in an effort to make my life easier, I slow cooked a whole chicken early in the week and then made Pioneer Woman’s chicken spaghetti with half of it and then used the rest for this. If you wanna make your life really easy, buy a rotisserie chicken from the grocery store.

This is going to be a winter staple for us, especially after my husband gets home. I was sending him photos of the cooking process and eventually he just started ignoring me completely because chicken and noodles is his fave! 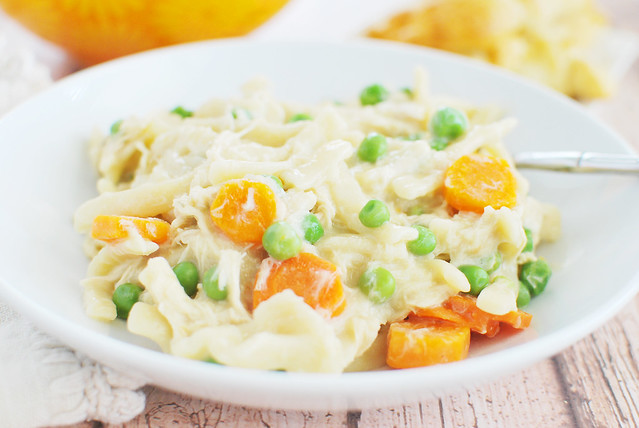