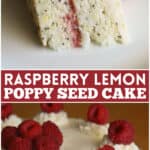 If you love all things lemon poppy seed, you have to try Lemon Poppy Seed Cookies!

Are you guys tired of hearing about my birthday?

I’m so tired of talking about it. I told you in my ice cream post that I really don’t like my birthday and the only reason that I let my husband invite friends over for burgers this past weekend was because I didn’t realize it was my birthday until it was too late.

I used my birthday/friends coming over as an excuse to make this cake that I’ve wanted to make for so long. You guys know that I am very much against fruit in desserts but the cake just spoke to me for some reason. I think it’s because I love the lemon & raspberry combination.

This cake turned out so beautiful. I love the little black specks throughout. The lemon zest was tart and the crumb light and fluffy. The curd was smooth and a nice change from typical layer cake filling.

How To Make Raspberry Curd

How To Make Lemon Buttercream Frosting

How Long Is Lemon Poppy Seed Good For?

This cake will be fine for up to a week if covered and stored in the refrigerator. Try to store it in an airtight container so it doesn’t dry out.

I would bring it to room temperature (or at least take the chill off) by setting it on the counter for a while before serving it.

For the raspberry curd:

For the lemon buttercream frosting: