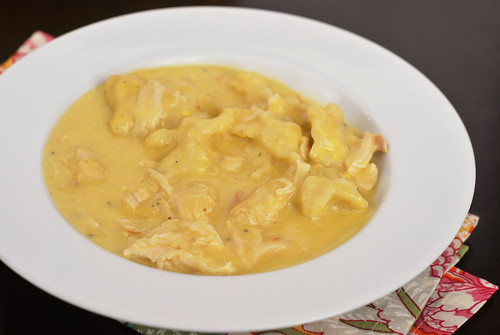 We’ve had snow a couple times already this year. RIGHT?! I grew up in the land of the hurricanes so this is completely foreign to me. I am, however, used to the hype that surrounds weather. Don’t get me wrong, I’ve slept in a closet on more than one occasion because it was the only window-less place in the house and I’ve had more than my share of power outages because of storms. But for the most part, those hurricanes tend to be more hype than anything.

So you would think that when the weatherman declared a blizzard on it’s way I would’ve brushed it off. But I prepared. (And by prepared, I mean I bought a couple gallons of milk and a couple bags of flour. I was prepared for baking.) I even planned this chicken & dumpling meal even though I was absolutely positive that I hated chicken and dumplings. I thought it would be the perfect meal to eat with snow swirling around outside.

We got about 1/2″ of snow. And the dog ate most of that in the time it took me to boil water for coffee. Some blizzard, eh?

I went forward with my chicken and dumplings plan though because this recipe is super easy and I had already decided I wasn’t cooking. It shocked the heck out of me! So easy, just a few ingredients, and my kids LOVED it.

The only problem with this recipe is that it can get a little salty so I definitely recommend using a low-sodium chicken broth and then you can salt it yourself if it needs it. Odds are, you won’t even need it though.