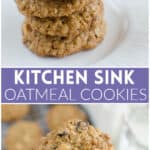 This Kitchen Sink Oatmeal Cookies recipe is the perfect way to use up all those bags that only have a few tablespoons of chocolate chips or ⅓ cup of mini M&Ms. Just make the oatmeal cookie dough and throw in whatever you have.

I happened to have almost empty bags of semisweet chocolate chunks, white chocolate chips, cinnamon chips, walnuts, raisins, and coconut. If you have chopped hazelnuts or maybe some butterscotch chips or some dried cranberries, throw those in instead. There’s really no wrong way to do these.

I love all the different textures in a cookie like this especially the crunchy walnuts with the squishy raisins. I hate an oatmeal cookie that only has a couple raisins scattered throughout – I need a lot going on in an oatmeal cookie and this totally does it for me.

These cookies are good for about 3 days before they lose their freshness. Make sure to store them in an airtight container.

You can also freeze them for up to 3 months. I usually just use a ziploc freezer bag and make sure to squeeze all the air out. Defrost in the fridge or on the counter when you’re ready to serve.

Where To Find Cinnamon Chips?

You should be able to find cinnamon chips at most grocery stores in the baking aisle with the regular chocolate chips. I see them more often around the holidays so stock up!

If you can’t find them in store, you can always order them online.